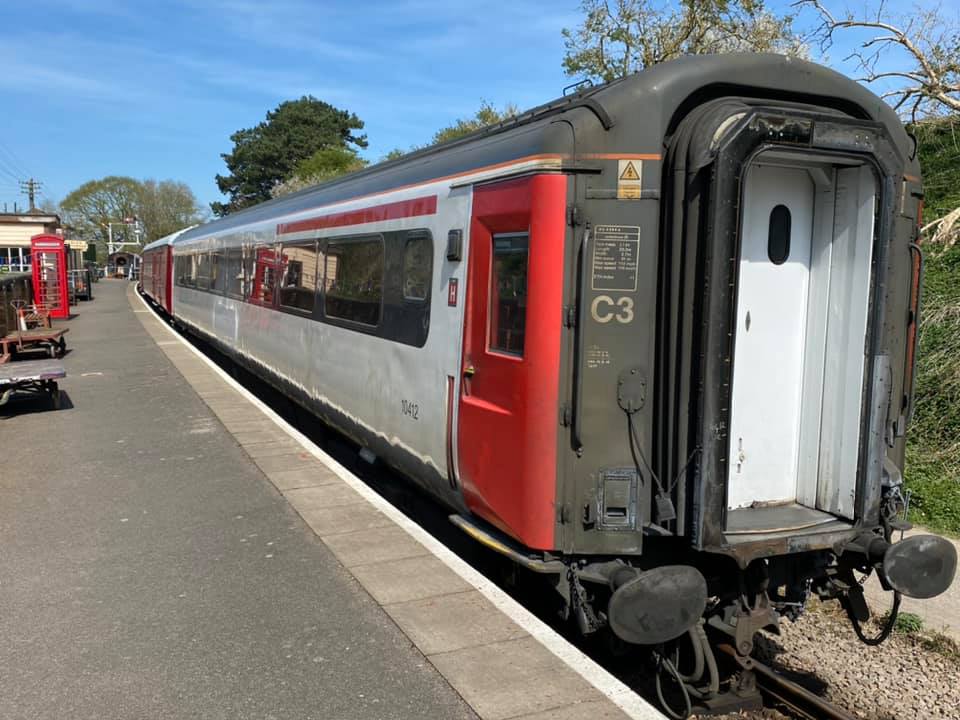 The history of the coach is quite complex due to changes to British Rail’s catering needs in the mid 1970s. Originally ordered under lot number 30884, the coach was to be part of the Western Region Inter-City 125 / High Speed Train (HST) set numbered 253006. There was a delay in building the Mark 3 catering vehicles which affected the set allocations for the launch of the Inter-City 125 services out of Paddington in 1976.

During the early days of mainline Inter-City 125 service, an over capacity of catering capability was found to have been ordered & supplied to the Western Region for their HST sets. Each set had been allocated two catering vehicles (a kitchen & separate buffet coach). It was decided to transfer the TRUK coaches to the Eastern Region for using in their sets and reduced the Western Region set to two power cars plus seven trailer coaches. TRUK 40506 was reallocated to set 254006 for the start other East Coast Mainline HST services in 1978.

At some point it was decided to reclassify the seating in 40506 as First Class, as the coach was built with first class seats. This meant 40506’s classification was changed to be a Trailer Restaurant First Kitchen (TRFK).

During the 1980s further changes to the HST catering provision were made and 40506 was sent for storage then conversion for use as a locomotive hauled coach on the West Coast Mainline, becoming a Restaurant First (Modular) or RFM numbered 10203 for used by the Intercity sector. Note this vehicle was the first of the ‘production’ conversions after two prototypes (10201 & 10202).

As Virgin Trains West Coast, the successor to INTERCITY, replaced their fleet RFM 10203 migrated to the Great Eastern Mainline (GEML) for use with Anglia Railways, One, National Express and then the various versions of Greater Anglia over the years until withdrawal from service in late 2019/early 2020.

The work was carried out by Vossloh Kiepe in a specially prepared area of Abellio Greater Anglia’s Crown Point Depot in Norwich. In addition to the refurbishment work described above RFM 10203 was converted to provide more seating standard class seating thus the coach became a Tourist Standard Open Buffet (TSOB) also known as a Tourist Standard Buffet (TSB) and was renumbered 10412

TSOB 10412 continued its service on the Great Eastern Mainline until the 10th of March 2020 when, due to changes in the regulations for access for persons of restricted mobility, Greater Anglia returned the coach to its owner, a Rolling Stock Company (ROSCO) called Porterbrook.

In late March 2020 it was announced that Porterbrook had donated TSOB 10412 to the LMS 10000 – The Ivatt Diesel Recreation Society and the coach would be placed on a long term loan to the Northampton & Lamport Railway.

The livery history of the coach reflects it various uses, users and locations:-