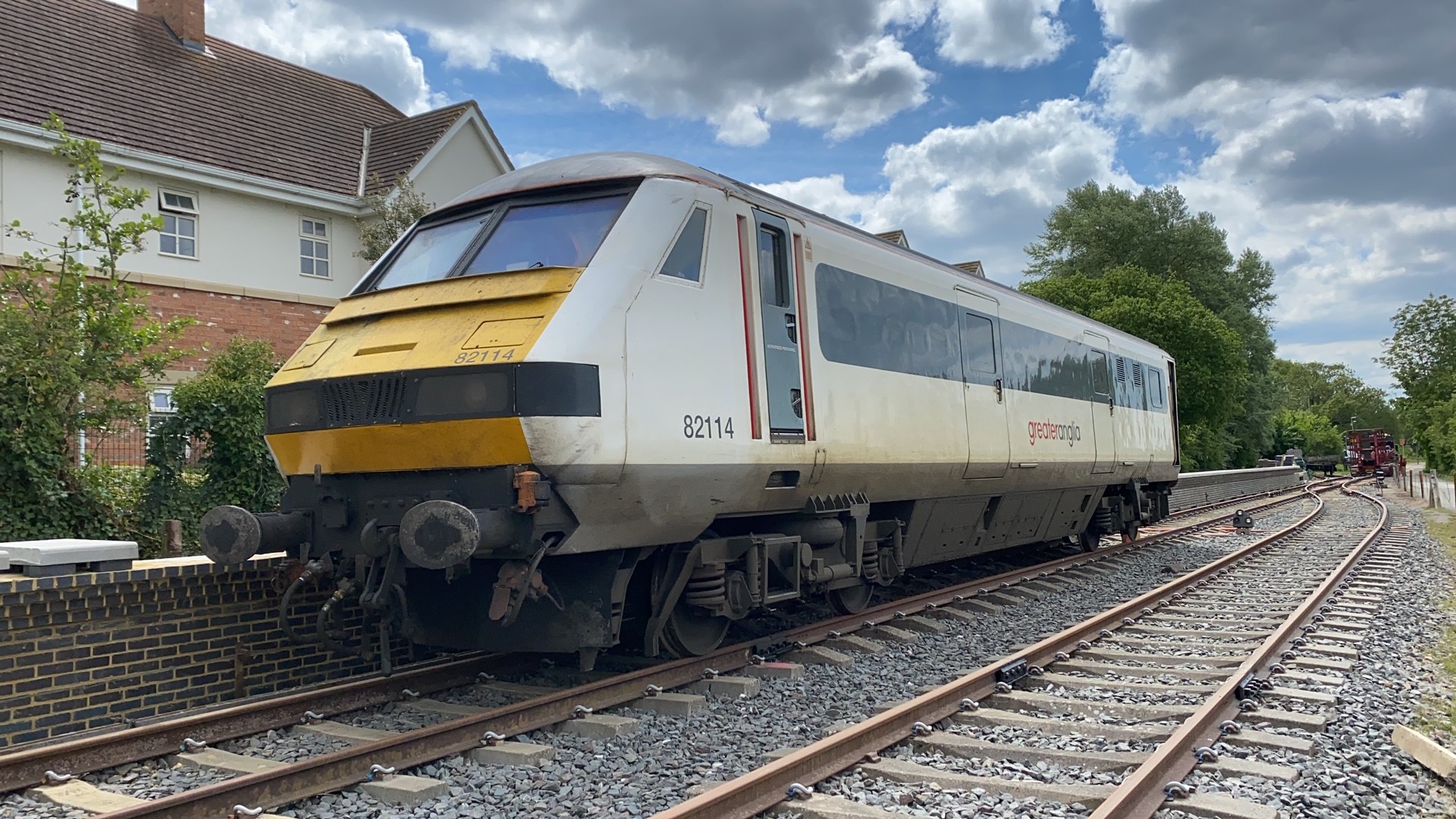 BR Mark 3b Driving Van Trailer (DVT) № 82114 was built in 1988 by British Rail Engineering Ltd. (BREL) at Derby Litchurch Lane Works, to work trains with a Class 90, 87 or 86 locomotive at the other end. The styling of the cab or number 1 end of the DVT is based on the cab front of the then new Class 90 locomotives.

During the 1980s INTERCITY, sector of British Rail (BR) looked to reduce costs and it decided to implement fixed rakes of coaching stock and DVT vehicles on the West Coast Mainline (WCML). These ideas allowed for a reduction in the number of locomotives required and to shorten the turnaround time at the terminal stations as only the driver needs to change ends prior to departure.

Originally the DVTs were to be classified as Driving Luggage Vans (DLV) but this was changed to Driving Van Trailers prior to the vehicles entering service in 1998. A DVT is a guard’s luggage or parcels van that has a driver’s cab at one end.

The bogies fitted underneath a Mk3b DVT are known as T4 bogies. This design was the BR in-house design proposed for the new 140 mph rated Mk4 coaches being built for the East Coast Mainline. After testing it was decided to use a Swiss SIG bogie for the Mk4 coaches and the T4 bogies were only used under the Mk3b DVTs and the Class 158/159 Diesel Multiple Units (DMU).

The successor to INTERCITY on the WCML was Virgin West Coast / Virgin Trains who carried on utilising the BR vehicles until the introduction of the Class 390 Pendolino units from 2002-2005. After use with Virgin trains ceased 15 Mk3b DVTs were transferred to work out of London Liverpool Street to Norwich for the ONE franchise.

DVT 82114 continued its service on the Great Eastern Mainline (GEML) until the 12th of March 2020 when, due to changes in the regulations for access for persons of restricted mobility, Greater Anglia returned the vehicle  to its owner, a Rolling Stock Company (ROSCO) called Porterbrook. The last locomotive hauled service by Greater Anglia ran on the 24th of March 2020.

The livery history of the DVT reflects it various franchise operators since the privatisation of BR:-