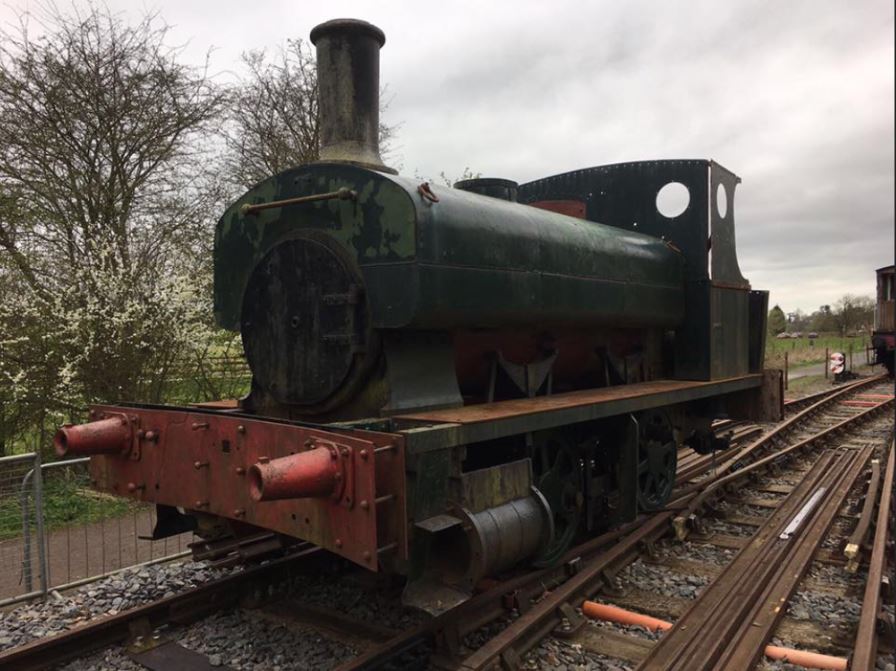 ‘Firefly’ immediately after arriving at the NLR (Boughton) in March 2017
L776 built in 1896 as a stock locomotive and stored until released from Andrew Barclay’s Kilmarnock works as Firefly to fulfil an order received in June 1899 from the Mellingriffith and Co. Ltd for their Tin Plate works at Whitchurch, Glamorgan.

No. 776 Firefly arrived in Whitechurch in November 1899 and remained until around 1925 when a sale to P. Baker Ltd of Cardiff occurred. P. Baker Ltd. renamed No. 776 Albion after the company’s works.

After a rebuild in 1928, the locomotive was sold by P. Baker Ltd. in 1931 to the Oxford and Shipton Cement Ltd, latterly the Alpha Cement Company of Shipton-on-Cherwell, Oxon. The company later became part of Associated Portland Cement Manufacturers who transferred the engine to their Houghton Regis, Dunstable plant in 1952.
Whilst at Dunstable a second renaming occurred where the name Punch Hull was given in honour of one of the drivers. In 1966, No. 776 Punch Hull was replaced by a diesel locomotive and in March 1967 was presented to Quainton Railway Society. Arrival at Quainton Road Buckinghamshire was delayed until April 1969, after a period of temporary storage at the London Preservation Society’s (QRS forerunner) Skimpot Lane, Luton, storage depot. The Quainton Road site currently forms part of the Buckinghamshire Railway Centre.

No. 776 Punch Hull subsequently relocated to the Rutland Railway Museum, Cottesmore (now known as Rocks by Rail) after a change of ownership in July 1987. A restoration started with a renaming back to the original Firefly name.

The owners carried out a number of major tasks, including turning the tyres and journals and fitting a new crank pin to the left hand driving wheel. A full strip down to bare frames revealed several fatigue cracks in the cast iron saddle that holds the front of the boiler and acts as the front frame stretcher. The cracks, although plated to hold the casting together, ran right through the casting, leaving the front end held together by the boiler and the buffer beam. After the removal of the front buffer beam, welding repairs were carried out on the saddle at the same time as an additional stretcher was welded in place under the footplate. The additional stretcher is to try to relieve some of the stress loading. Following the welding, the entire frames were stripped back to bare metal then primed and painted. The horn guides were machined after removal, as well as the axle boxes, which have been reassembled with new journal bearings

Whilst at Rutland Railway Museum, Cottesmore / Rocks on Rail several changes to the ownership of the locomotive occurred, with pauses in the restoration works occurring.

A move away from Cottesmore saw the locomotive based at the Pontypool & Blaenavon railway, prior to a further change in ownership and a move to the Northampton & Lamport Railway on 28th March 2017.

Research by the various owners has revealed that some of the original drawings are present and archived in the Andrew Barclay Archive, maintained by Glasgow University. Sadly, no official works photograph has been located.
No. 776 Firefly has its own Facebook page at https://www.facebook.com/fireflyno776/, through which the owner can be contacted, if you would like to help restore & operate the locomotive.

Our online donations platform is moving from 'Golden Giving' to 'Peoples Fundraising'. END_OF_DOCUMENT_TOKEN_TO_BE_REPLACED

Introducing an exciting new project at the NLR END_OF_DOCUMENT_TOKEN_TO_BE_REPLACED