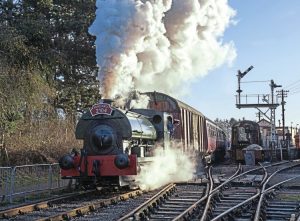 The locomotive is a modified R4 Class 0-4-0ST with a cut down cab (9 in) in order to work coal wagons under the tipplers. Built in 1948 & delivered to Croydon ‘B’ Power Station, it was returned for storage as the power station was not completed. Final delivery/re-delivery occurred in 1950.

№ 2104 was withdrawn in April 1972 and purchased for preservation in December 1972. The locomotive was restored to full working order by August 1976 and used in preservation for passenger work until the boiler certificate expired in April 1983.

Since being preserved the locomotive has starred in the Granada series Jewel in the Crown, where it was used for hauling Indian coaches in the massacre scenes.

No.2104 has been at the NLR since 1989. She pulled the Railway’s first passenger train in 1995 and broke through the ribbon as part of the Railway’s ‘Grand Opening’ ceremony in 1996. She has been the mainstay of the Railway’s steam fleet ever since, going through two 10 year boiler certificates before withdrawal on 2nd January 2017. She is currently sorted, pending her next overhaul (no date for commencement or time frame for the overhaul has been set). Our online donations platform is moving from 'Golden Giving' to 'Peoples Fundraising'. END_OF_DOCUMENT_TOKEN_TO_BE_REPLACED

Introducing an exciting new project at the NLR END_OF_DOCUMENT_TOKEN_TO_BE_REPLACED