Give and Gain: Getting ready for Santa, a Coach surprise, Bolts and a Tornado!

On the 14th of September 2015, Nationwide Building Society volunteers came to the N&LR to help out as part of a corporate volunteering scheme.

The group was split into smaller groups to undertake a few tasks based on the prevailing weather conditions.
The tasks were:

Facilitators for the day were David Millard (N&LR Infrastructure Team Member) and Gordon Titmuss (N&LR General Manager and NSRL Chairman) with a fleeting visit by Grahame Every (N&LR Volunteering Co-ordinator).

At the start of the day the first two tasks were started due to the wet conditions outside, as can be seen in the photos below: 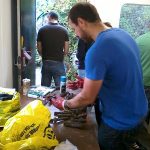 Sorting out the track fishplate nuts and bolts by useability, thread type and size. Photo: D.Millard 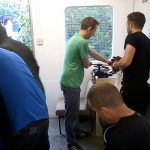 Nationwide Building Society volunteers using a die to clean up the threads of a track fishplate bolt. Photo: D.Millard 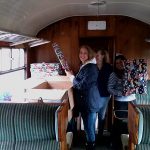 The ladies of the group chose to help Santa by checking the wrapping paper on the presents for the Santa’s Special Trains. Note Santa has given special permission for this photo to be shown, no others were allowed as he wants to keep the presents a surprise. Photo: D.Millard 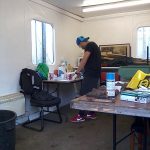 The important job of being a Tea and Coffee boy! Photo: D.Millard

As the weather improved before lunch the bolt refurbishment was slowed down to allow a start on scraping M3919’s bodyside.

During the lunch break an intense thunderstorm arrived with its additional feature of a tornado nearby in Duston, as seen on TV and in other media outlets.

As the afternoon weather improved, it stayed dry to allow a continuation of the paint scraping and fish bolt refurbishment.

A surprise to the N&LR Volunteer Working Members (including some who remember the arrival of M3919 at the railway) was the discovery of green paint underneath the more modern layers of paint. As more careful scraping was done, a primrose cream colour was found under the green in the window band area of the bodywork. 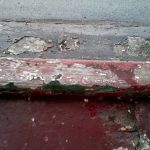 The findings of the Nationwide Building Society’s volunteers has been passed onto the Chairman of the NLRPS for use in the coach’s refurbishment program that is being developed at the moment.

Many thanks to all who took part in the day, it brought out a few surprises along the way, but a lot of time and effort has been saved by doing tasks that would have been done at the weekends by one or two volunteer working members. The day’s obligatory group photograph is shown below 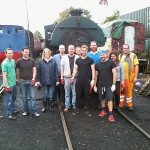