Give and Gain: Track Bolts, Containers and Bogie Painting

On the 10th of September 2015, Nationwide Building Society volunteers Rob, Carol, Helen, Vicky, Liz, Peta, John and Paul came to the N&LR to help out as part of a corporate volunteering scheme.

The group was split in to two groups to undertake a couple of tasks at the same time as the weather was nice.

One group, supervised by N&LR Volunteer Coordinator Grahame Every continued the astounding transformation of the containers at the entrance to the railway; this time the end doors were cleaned and repainted. 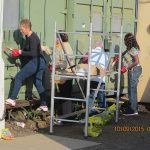 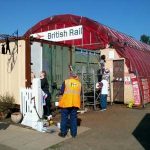 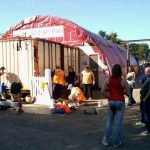 As Volunteer Coordinator Grahame Every and a couple of the Nationwide Building Society volunteers apply the finishing touches, the rest of the group look on admiring the days transformation. Photo: D.Millard 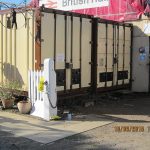 After the container door repainting. Paint colours used in the transformation are BS381C Biscuit and Mid Brown, along with recently donated black Aldi Metalcare paint. Photo: Grahame Every 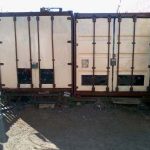 The ends of the containers after the painting had been completed. The colours used are BS381C Biscuit and Mid Brown, along with recently donated Black Aldi Metalcare paint. Photo: D.Millard

The repainting used the Engineering Services recommended Skip & Container paint in BS381C Biscuit and Mid Brown. Additionally some of the recently donated black Aldi Metalcare paint was used as well.

The other half of the group completed two tasks during the day, under the supervision of Volunteer Working Member David Millard. This saw the changing out of some fishplate bolts at Pitsford Sidings and the painting of BR Mk2 coach 5174 B4 bogies on the footpath side.

The fishplate bolt task built on some track work carried out by the infrastructure Department over the previous two weekends. The bolts installed were refurbished by a previous group of Nationwide Building Society volunteers on Wednesday 15th July 2015 (see 15th July 2015 Report).

The bogie repainting involved the scraping off of the accumulated road dirt prior to painting the metalwork with black chlorinated rubber paint, as used by BR. 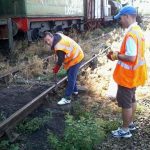 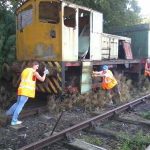 Nationwide Building Society volunteers thought that the fishplate task wasn’t enough exercise, so Helen, Rob and Paul did some competitive team building….. only to find out that the hand brake was on!. Note: no rail movements were undertaken during the Give and Gain day and railway volunteers were present at all times. Photo: D.Millard 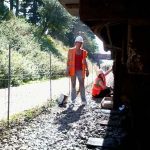 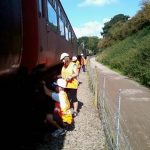 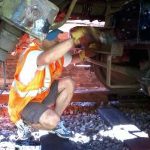 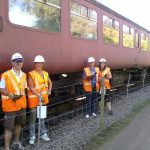 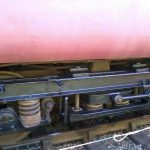 During the day the tea breaks were taken outside as the weather was so nice. The Platform 3 buffet was opened by NLRPS Secretary & Premier Line Editor Brian Chambers. 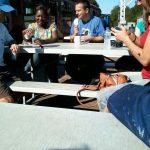 Nationwide Building Society volunteers enjoy a tea/coffee and ice cream in the sun during a break. Photo: D.Millard 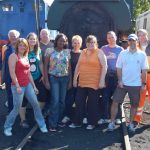 Many thanks to all of those involved with the day as the time & effort donated is really improving the N&LR.

Help us restore our Booking Office back into use END_OF_DOCUMENT_TOKEN_TO_BE_REPLACED

For news, photos and information on our exciting extension to Boughton, please click here END_OF_DOCUMENT_TOKEN_TO_BE_REPLACED