Check rails form an important part of the permanent way, ensuring the safe passage of the train’s wheels through the points by guiding them over the crossing area without taking the wrong route (or striking the crossing nose) and derailing. To perform properly, the track needs to be to the correct gauge, and the check rails need to be the correct distance from the running rail on the opposite side of the track. The check rails also need to have the correct flangeway gap between the check rail and the adjoining running rail, and to avoid the end being struck by a wheel, they need to have a splayed end, with a minimum entry gap. The check rails are normally fixed in special chairs that hold both the check rail and the adjoining rail together with the correct flangeway gap, and the splayed ends are secured in right and left handed chairs at either end.

The track gauge and fittings needs to be properly maintained to keep all the required tolerances, and even then the check rail can wear out to the point where tolerances are exceeded. At Pitsford Sidings, we had some maintenance issues to deal with. There are three points there, with one on the running line, and this meant a total of 6 check rails. It turns out that the check rails there which were second hand from Northampton power station sidings were industrial style rather than main line style check rails and had quite a sharp splayed end. This prevented them from being secured in standard left and right hand check rail chairs. Not too big a problem in itself, but our routine track inspections had identified that the check rails themselves were also becoming worn. Because the side of the head of the check rail had been worn down over the years, it was unable to maintain the correct flangeway gap and therefore the correct distance from the opposite side running rail. We therefore decided it was time to renew the check rails, in the process fitting some of the correct style, with the correct left and right hand check rail chairs. The task therefore, to make 6 new check rails. 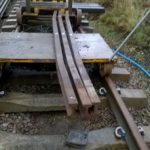 We had already made 3 check rails earlier in the year, which are seen loaded on the permanent way trolley in the sidings down at Boughton. Now we need 3 more before we take possession of the line at Pitsford and replace all 6 in one go. Photo: Graham Peacock

First stage – find a section of good quality, unworn rail. This 30 foot section was part of a batch of rail recently donated by London Underground and was in use a couple of months ago on the District Line somewhere near Hornchurch. It was only made in 2008 and was virtually unworn before LU decided to renew the entire section. This section has a weld in the middle where LU eliminated the rail joints and we’ve decided to cut the weld out the middle and trim the two remaining sections to make 2 x 13 foot long check rails. Photo: Graham Peacock 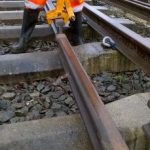 Seen here with the middle section cut out with a rail disc cutter. Note the weld half way along the offcut and the neat cut that the disc cutter achieves. Photo: Graham Peacock 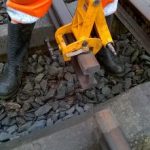 The attachment clamped to rail hold the disc cutter and helps guide it to cut the rail safely and obtain a decent straight cut. It was raining when we did this job and the rail is obviously wet, apart from where the heat from the cutting operation has dried out the end section. Photo: Graham Peacock 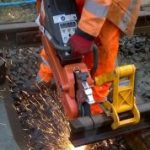 Then we trimmed the opposite ends of the rail, eliminating any ends that were flame cut when London Underground removed the rail from the District Line and producing a final length of 13 feet. Note the use of the guide which the disc cutter is now attached to. The rail has been placed in chairs to keep it off the ground and secure from any inadvertent movement whilst we cut it. Photo: Graham Peacock

This operation generates heat and sparks and must only be done when using appropriate protection. Operatives should be covered up to protect against burns from hot debris. Flameproof clothing is preferable as otherwise the sparks can burn lots of holes in clothing. Safety footwear, gloves, and importantly eye protection, and ear defenders as this is also noisy. No point in taking shortcuts. Photo: Graham Peacock 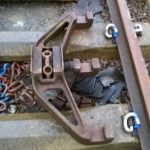 Now we have some straight rails the correct length. We need to bend them to produce a splayed end starting in the correct place, the correct length and with the correct offset. This piece of kit is worth its weight in gold and it weights more than a few blocks of gold! A rail Jim crow. The rail head sits in the three jaws and the wheel is wound around to pull the centre jaw out of line to produce a set in the rail. It works best if the rail is softened by heating. Photo: Graham Peacock 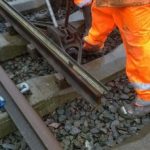 The straight rail is placed with the head in the crow. A piece of point rodding has been placed on top to use as a straight edge to measure the offset of the bend. Now comes the hard bit. It has to be physically wound around to bend the rail. Rail is flexible to a degree, and doesn’t come in curves for the track, as for the normal curvature on a running line, will easily flex to the curve being laid. But producing a physical bend over a short distance is hard work, and requires effort. Photo: Graham Peacock 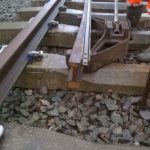 Now you can see the bend being produced. Not quite there yet. We need a permanent deflection of 1 ¾ inches (41mm) at the end of the check rail. Photo: Graham Peacock 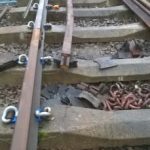 And finally, the near end is correctly bent. Now for the far end. We’ve already moved the rail along to start the process again. Photo: Graham Peacock 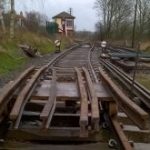 After a days hard work, a bit more rail cutting and lots of bending, we had completed 3 more check rails to add to the 3 we had at the start of the day. One final job to do though. These were quickly loaded on the trolley, and with the route set and disc signal cleared out of our pre-fabrication area in Boughton sidings, we soon headed off to Pitsford Sidings, to drop the new check rails off alongside each point ready for the next day’s work. Then after a cup of hot coffee, it was home for the evening for Graham Peacock, Ian Nicholls and David Millard. Photo: Graham Peacock