Following an appeal to GB Railfreight by heritage railway Northampton Steam Railway (NSR), both GB Railfreight and London Underground teamed up in a partnership to assist NSR by providing redundant assets for use in track maintenance renewal and extension work on the steam railway line based at Chapel Brampton, Northampton.

NSR initially contacted GBRf, who, since 2005 under a 10 year contract, have been supporting London Underground’s track renewal programme with main line haulage with a key operational base at Wellingborough which is not far from the heritage railway in Northamptonshire. NSR enquiries about possibility of redundant assets being made available for re-use on works on their line led to the GBRf managing director putting them in direct contact with London Underground’s Track Programme resulting in an offer of a donation of track materials arising from their weekend renewal works on their network.

During late 2015 London Underground offered a quantity of track materials arising during weekend renewals over a number of planned possessions during the last quarter of the year. In an extension of the usual arrangements between GBRf and London Underground, materials were moved direct from London Underground possessions by GBRf to their yard at Wellingborough as whole track panels. Whilst the panels would normally be moved onwards then for recycling, a proportion of the track panels from each weekend’s movement to the yard were then offloaded by GBRf onto a part of their yard, for dismantling and collection by NSR to their Chapel Brampton headquarters. In a further act of generosity GBRf arranged for an outside contractor to dismantle the first batch of panels, whilst NSR resolved some issues with equipment essential to this task that was being overhauled. Following this, NSR members, working in accordance with GBRf health and safety requirements, were permitted access to the Wellingborough yard to strip out panels following each delivery from London Underground possessions.

Track materials have been put to a number of uses by NSR, including relaying of one of the sidings at their Pitsford Sidings location on which the sleepers were life expired and enhancement works on their almost completed Boughton extension track work. Some materials have been put aside for their future extension towards Merry Tom crossing and ultimately Spratton, which will be commenced once the Boughton extension is open. NSR have been very pleased with the generosity of London Underground and the spirit of co-operation that was evident from both GBRf and London Underground. 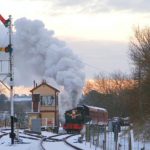 Peckett 2104 in the snow at Pitsford Sidings whilst hauling one of Santa’s Special Trains. Photo: N&LR Collection 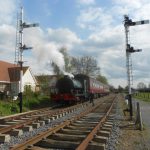 Peckett 2104 is see standing at the Boughton platform starter signal for the first time on the 6th of May 2012. Photo: G.R. Titmuss 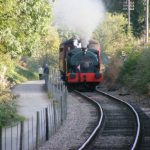 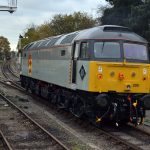 Class 47205 backing on to its coaches prior to coupling up on 6th Nov 2011. Class 31289 awaits its next move in the background too. Photo: David Millard 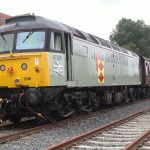 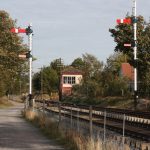 Boughton Signal Box with both starter signal poles in place. The pole on the right is the platform starter signal whilst the one on the left is the starter for the loop. Photo: N&LR Collection 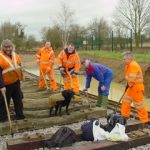 This operation generates heat and sparks and must only be done when using appropriate protection. Operatives should be covered up to protect against burns from hot debris. Flameproof clothing is preferable as otherwise the sparks can burn lots of holes in clothing. Safety footwear, gloves, and importantly eye protection, and ear defenders as this is also noisy. No point in taking shortcuts. Photo: Graham Peacock 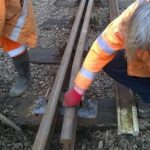 With screws put back in and the new check rail installed, Ian Nicholls supervises as David Millard backfills the ballast and inspects the new track work. Photo: Graham Peacock